This job story looks at the benefits of using an automatic lubrication system instead of manual lubrication in a New England feed mill. The mill employs a bucket elevator with two bearings supporting the head pulley at the top of a vertical bulk conveyor. The elevator lifts various grain products an estimated 40 feet in the air to the top of a silo storage system. There, the grain is distributed to various silos for blending into specific animal feed mixes. Lubrication is especially important on this equipment because the weight of the entire conveying system and the grain being lifted rests on the head pulley and its two bearings.

When the bucket elevator’s bearings were being manually lubricated, it had to be done every two weeks. To lubricate the bearings, a maintenance worker would don a safety harness to climb and subsequently work off of a steel 40′ ladder. From there, the work would manually shoot grease into the bearings. The work was dangerous and uncomfortable, and required more than one hour of maintenance labor every two weeks. If the bearings were neglected, bearing failure could result in a loss of feed production and the loss of many more maintenance crew hours to replace the destroyed bearings.

AIRMATIC Application Specialists surveyed the situation and determined the solution to this problem was to install two ATS ELECTRO-LUBE’s ULTIMATE LUBER™ Automatic Lubricators, one on each of the two bearings supporting the head pulley. The lubricators automatically dispense consistent lubrication over long intervals, applying constant pressure and positive lubrication on the bearing points, to not only keep moisture and other contaminants out of the bearing but also ensure that only the precise amount of lubricant specified by the OEM is delivered (no “over-lubrication”). In addition, because the lubricators are transparent and have LED indicators, both lubricant levels and operating status can be easily checked by operators and inspectors from the floor.

As this case study shows, the automatic lubrication system worked exceedingly well for this feed mill; so well, in fact, that eight additional lubricators have since been installed on similar equipment. The plant manager reports that the lubricators have afforded him peace of mind due to knowing that automatic and consistent lubrication is preventing premature conveyor failure. He is also pleased that worker safety has improved since constant maintenance is no longer necessary on the bucket elevator’s 40-foot-high head pulley.

If your mill is not the well-oiled machine that it should be, call us at AIRMATIC. We’ll Handle It. 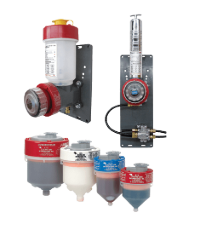