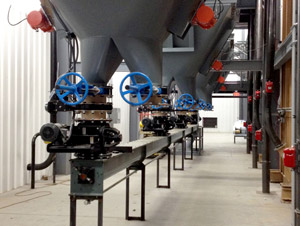 This case study focuses on the functionality of impingement-type vs inflatable-seat-type butterfly valves used to control the flow of abrasive materials. The abrasive material in this case is sugar. The site of this study is a food manufacturing plant in Dover, Delaware. Butterfly valves are used for isolating and regulating flow. The sealing mechanism is a disc that, with the valve closed, engages with an elastic seat and completely blocks the passageway. When the valve is opened, the disc turns 90° to allow the material to pass through. Butterfly valves are often favored because they are lower in cost, more compact, and lighter in weight compared to slide gates, pinch valves, or other valve designs.

The sugar processed at this food manufacturing plant is received in rail cars and then gravity-fed to hoppers. The hoppers then feed various lines in the plant that are controlled by impingement-type butterfly valves. The highly abrasive sugar was wearing the standard valves’ seats prematurely at the point of impingement due to the seats’ tendency to absorb moisture, causing the seats to shrink and swell, and eventually crack.

AIRMATIC reviewed the situation and recommended replacing the existing butterfly valves with POSI-FLATE’s Inflatable Seat Butterfly Valves. Unlike the existing valves, which seal with friction, POSI-FLATE valves use an inflatable seat to seal with air pressure. The reduced friction requires less operating torque to open the valve and therefore a smaller actuator. This results in lower actuator cost, lower operating cost, less compressed air used, reduced repair frequency, and increased valve life. The inflatable seat eliminated impingement wear (due to making only casual contact with the disc during opening and closing) and promoted substantially longer seat life. Also, the flexing of the seat reduced build-up of residual sugar deposits and kept a tighter seal. The food manufacturing plant has since installed two such valves and has budgeted to replace a dozen more in the future. An added benefit was that the split body design allowed the customer to keep the valve in place while performing required maintenance.

In situations where an abrasive material is prematurely wearing a standard butterfly valve, one affordable option is to replace the valve with a POSI-FLATE Inflatable Seat Butterfly Valve. Not only does the POSI-FLATE butterfly valve outperform all other valves in field tests, but the inflatable seat automatically compensates for wear, thus providing longer valve life and lowering maintenance costs.

If things aren’t going as smoothly as you’d like at your plant, call us at AIRMATIC. We’ll Handle It. 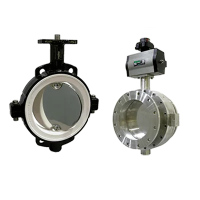 Select from Airmatic's catalog of inflatable seat and static seat butterfly valves that regulate the flow of solids, slurries, and gasses through pipes and vessels.